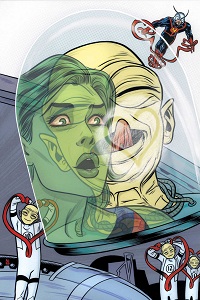 Before jumping into the fun that is this issue, things get very serious for a moment in the Baxter Building, when Alex Power confronts Ant-Man about his real motivations for wanting to strike Dr. Doom. It would seem that a scene like this is out of place given the campy theme of the book, but it actually grounds it, and reminds everyone what's really underneath the otherwise light mood of the title. Then there's the fun stuff. She-Hulk goes out on a non-date with her old flame Wyatt Wingfoot, while the moloids, aided by Bentley-23, try in vain to ruin the evening for the pair. In the best style of a sitcom, the evil plan of the little ones not only fails miserably at every step, but makes things turn out even better for "The Jen" and her beau. The whole thing is a hoot that visually peaks on the dancing floor; Allred is simply a genius. The issue ends with the focus on another odd couple, but if you know your history well, it makes total sense. 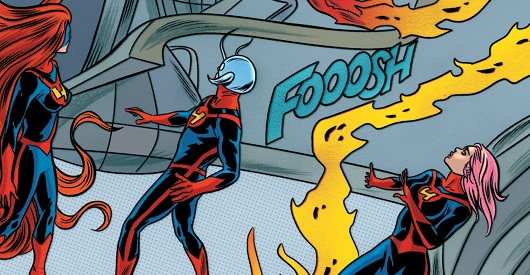 Posted by JoséVC at 8:52 PM No comments: 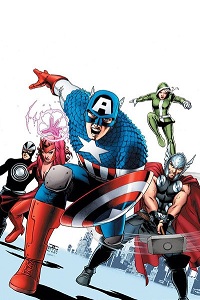 It's Havok and Scarlet Witch against the Mighty Thor! With all the delays this title has suffered, it is a relief that Remender is not wasting time setting up the conflict; instead, he throws readers right into the middle of the fight, and it is a great choice. Alex and Wanda work amazingly well together, and being almost family, let's hope they develop a close relationship. John Cassaday does not miss a beat in his interpretation of the battle, and the colors are breathtaking. The Red Skull, in the meantime, tries to demoralize Cap into switching sides using an argument that taken to face value, would make sense, but fails to account for the positive aspects of society, a point the Star Spangled Avenger makes clear in a heroic fashion. The issue offers great moments between Havok and Cap, Wanda and Rogue, and a surprising and moving Thor-Wolverine interaction. As if this isn't enough, the story jumps momentarily into the near future to see the return of O... MG! It's a good tease! 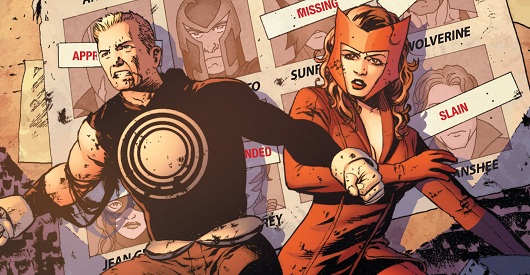 Havok and the Scarlet Witch by John Cassaday

Posted by JoséVC at 8:59 PM No comments:


Trying to stop his mother from spreading chaos throughout Gotham and the world, the Boy Wonder makes his last stand against the forces of Leviathan. Of the many members in the Bat-family, Morrison chooses Nightwing to be the one who gets to have a final interaction with Robin before the end, and it is pure gold. Damian is finally at peace with himself, and the convoluted emotions inside him have receded, which allows him the opportunity to make his last actions those of a true hero. 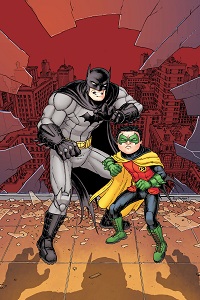 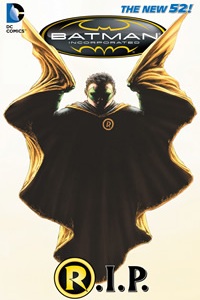 Strangely enough, Batman is mostly absent from the story, which in hindsight is the right move as not to take the attention away from the real star of the issue. Chris Burnham does not hold back, and makes Robin's sacrifice as cruel and mean as possible; it is graphic indeed. Jason Masters provides a brief collaboration for Red Robin's sequence, which is superbly choreographed  Whether this is a true change in the status quo remains to be seen; I tend to believe it is not a permanent situation, and before a year's time, we'll see Damian again. Great tale, though. 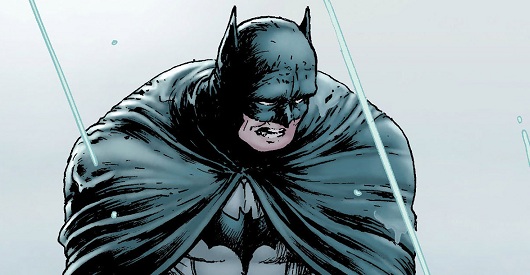 Posted by JoséVC at 6:30 PM No comments:

The Most Viewed in February 2013

And the most checked reviews in February by the followers of this blog were:

Posted by JoséVC at 1:37 PM No comments: