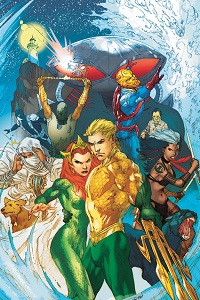 The Others concludes as Aquaman seeks revenge on Black Manta for the death of his former companions Kahina and Vostok. The emotionally charged final chapter of the arc explores how a haunted and guilt-ridden Aquaman sees himself, while his wife and old teammates make him realize how much he has grown and matured; this also seems to put an end to the metatextual references of how the character is perceived in the real world. The conflict with Manta is resolved in a satisfactory fashion -at least temporarily- with lots of action, and of course, the start of a whole new mystery in the form of the villain's atlantean benefactor. The characters introduced by Johns and Reis in this saga were extremely compelling and well defined; with only Ya'Wara, The Operative, and Prisoner of War left, let's hope we see more of them in future stories and in the larger DCU. Next: Throne of Atlantis!
Posted by JoséVC at 10:44 PM 1 comment:

The Most Viewed in October 2012

And the most popular posts of this blog in October were:

3. The Avengers vs. Ultron