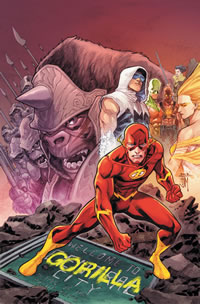 A surprise invasion from Gorilla City serves as the catalyst to a most unexpected alliance: The Flash and the Rogues team up to protect the Gem Cities from King Grodd and his forces. Manapul and Buccellato, however, take care in not making this a sudden truce, by forcing the Rogues into helping out only after failing to do what villains normally do. Meanwhile, the appearance of Turbine in Central city is about to make him a huge threat, not because of his powers, but because of the knowledge he holds. There is a major development for Trickster, a character that did not get a proper introduction into the book, so this crazy move comes out of the blue, but the visual execution is flawless. Speaking of, the heavy action of the story is nicely illustrated, and the coloring helps convey the sensations of heat, cold, speed, light, and electricity. Oh, and more on the enigmatic Daniel West. Nice issue!
Posted by JoséVC at 7:35 PM

Email ThisBlogThis!Share to TwitterShare to FacebookShare to Pinterest
Labels: DC Comics, The Flash

JoséVC
Comic Books are my passion.