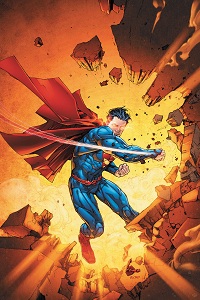 I completely missed Superman after his re-launch in 1986. That new version seemed like such a difficult character to write stories for, and even harder to read; it was quite painful, actually. The New 52 still didn't completely get me vested on the character, but with this single issue, Scott Lobdell has made me take a second look. In so many ways his Superman is a regression -in a good way- to the one from the Silver Age of comics, more specifically, the Curt Swan era. Thank you also, Mr. Lobdell, for that little tantrum Clark throws at the office regarding the ethics of today's so-called journalism; maybe the whole truth, justice, and the American way spiel was a little over the top, but the principle in general is a nice critique on the news business. Kenneth Rockafort and Sunny Gho kill it with the most amazing visuals the title has seen in the past year. That Tripedal curosiananiun (Kryptonian dragon thing) was fantastic.

Wait a minute... that's the second time this week dragons are mentioned. That gives me an idea... Dragon duel!
Posted by JoséVC at 4:49 PM

JoséVC
Comic Books are my passion.